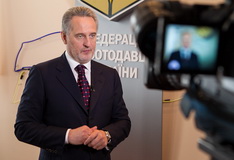 16 April 2013 Federation of Employers of Ukraine. Promotion of Enterprise

Business environment simplification will increase Ukraine’s GDP by 1.5-2.0%. These calculations were made by the Federation of Employers of Ukraine. Among the specific measures to improve the business climate FEU named reduction of the number of regulatory bodies and their powers. The overall picture of the activities of inspecting structures became clear after the completion of the National Registry of Inspecting Agencies initiated by President of the Federation of Employers of Ukraine Dmitry Firtash. Registry compiling had been lasted for about six months.

Compiled registry provides each businessman with an understanding about which state agency, when, how often, and what exactly can audit, stressed President of the FEU Dmitry Firtash.


“Today, a huge number of supervisors come to entrepreneurs with checks. All these numerous audits take a long time. This makes difficult to do business - people do not work, they just answer inspectors’ questions”, - said Dmitry Firtash.

Over the last year the President of the FEU held meetings with businessmen in eight regions. Entrepreneurs complain that frequent checking of numerous controllers complicate the work of enterprises. Agro-industrial company Nibulon is a champion on the number of inspections among the FUE members. In 2012, its activities have been checked 533 times, and the total duration of the tests lasted for 977 days in 2011.

During the presentation of the National Registry of Inspecting Agencies Vice–President of the Federation of Employers of Ukraine Alexey Miroshnichenko reported that today 70 state agencies have a right to inspect businesses in Ukraine.

According to new data, in 2012 the regulatory authorities carried out more than 2 million inspections of both small and large enterprises. Moreover, more than 40% of inspections were unscheduled. Average fine totaled UAH 479, and one audit costs the state UAH 11.6 thousand.

The research of the FEU experts showed that 44 agencies can limit or stop enterprise operation. In 2012, work of 154,600 enterprises was stopped. According to the FUE estimates, the average enterprise downtime is 45 working days. One day of a downtime costs all stopped businesses UAH 600 million - 1 billion. The FEU estimates total damage to business in the amount of at least UAH 27 billion in 2012.

“Business losses caused by inspecting bodies are enormous. Everybody loses - business people who bear losses, and the government, which does not receive payments to the state budget”, - said Alexey Miroshnichenko.

The registry is available at reestr.fru.org.ua.