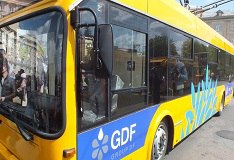 As part of the “Preserve Your City” program initiated by the owner of the company Dmitry Firtash, Azot has signed an agreement on cooperation and understanding with the Cherkasy City Council aiming to combine efforts for the socio-economic and cultural development of Cherkasy and improvement of the city's infrastructure.
The cost of new vehicles was about UAH 70 million.

“This is just the beginning, the beginning of the transport reform, which the city authorities are now supporting and will develop with the help of our company”, said Vitaliy Sklyarov, Chairman of the Board of Azot PJSC.

“These agreements and their implementation are a vivid example of social responsibility of big business”, summed up the signing of the document Anatoly Bondarenko, Cherkasy Mayor.

In addition, Azot, which cleans Cherkasy waste water, wrote off UAH 14 million of debts of the Cherkasyvodokanal utility.

“As mayor, I am very satisfied that together with Azot PJSC we have found understanding in the solving, first of all, of important for the city economic issues that have not been solved for years. Today an agreement was signed, and it is not just declarative intentions, it is an action for infrastructure development of the city and improvement of the life in Cherkasy. Donation of the fifteen trolleybuses is the continuation of the transport reform and development of the municipal transport aimed by the new government”, said Anatoly Bondarenko.