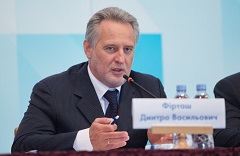 Realization of the project aimed at autonomous heating installation for Krasnoperekopsk residential areas is going to start in 2014. Funding for this program will be provided by the Chairman of the Group DF Supervisory Council Dmitry Firtash. This was stated during his visit to the Crimean Soda Plant which is a Krasnoperekopsk’s main enterprise.

The large-scale project will become part of the effort towards the implementation of the Preserve Your City program initiated by Dmitry Firtash. The “Crimean Soda Plant” is also providing an extensive support to Krasnoperekopsk and its neighborhood. As part of this assistance, the plant has donated a school bus to a school in Belogorsk district. At an earlier time, it completed the local hospital’s capital reconstruction furnishing it with essential medical equipment, and refurbished a local Culture Palace.

During his last trip to Krasnoperekopsk Dmitry Firtash also visited reconstructed Culture Palace. During the meeting with Krasnoperekopsk residents people thanked patron for this gift which will contribute to the cultural development of the city. In turn, the Chairman of the Group DF Supervisory Council also noted that the social partnership agreement with the city would be realizing in the future.