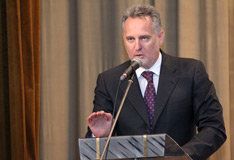 Mr. Dmitry Firtash instructed the executives of Crimean companies in which he holds equity to devise, in cooperation with municipalities, programs of the cities social and economic development. He made this announcement during his meeting with the staff of Krymsky TITAN plant, with residents of Armiansk and Krasnoperekopsk in which the Prime-Minister of Crimea Mr. Anatoliy Moguilev took part.

Mr. Firtash stressed that such programs development must rely on the opinion and priorities identified by the community. “We want to allow people to express themselves, to draw up a program against which a budget will then be tailored. Doing hundred things at a time does not make sense. Therefore, let’s sit down, identify two or three priority programs to start bringing order to the cities. We will make it all happen steadily and calmly. If we lay our hands on all things at a time, it won’t work out, we will simply end up with money dispersed with no result at the end of the day,” said Mr. Firtash.

The entrepreneur pointed out that expecting governmental funding is not a sensible idea as the state budget itself has “a lot of holes that need to be patched”.

According to Mr. Firtash, Krymsky TITAN and the Crimean Soda Plant will in this connection provide support to municipalities in implementing these programs to the extent of their abilities.

“We are aware of all bottlenecks – elevators, roofs, water pipes, sewage. If we say that all problems can be addressed simultaneously, it is going to be a lie. We are not politicians to distribute promises. Politicians may make pledges and then easily go away from them. We are here to work with you for long and we most certainly will have to answer for what we do and what we say,” noted Mr. Firtash.

To make these social programs realistic and viable, Mr. Firtash suggested that special boards be set up in both cities charged with collecting the citizens’ comments and proposals. Such boards will be comprised of representatives of community, local authorities and plants’ administrations.