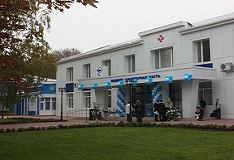 Concern STIROL opened a new medical unit in Gorlovka. New health facility was established as part of the Preserve Your City program initiated by the Chairman of the Group DF Supervisory Board Dmitry Firtash. For these purposes the company has provided more than UAH 6 million.

The new clinic is equipped with the latest technics including a unique ultrasound diagnostic apparatus, the only in the region.

Also STIROL has acquired a modern blood tests laboratory which is one of the best in the area. The laboratory is equipped with general clinical hematology analyzer that allows testing blood of 60 people for 20 indicators only for an hour. This equipment is needed during prophylactic examinations and while performing a general clinical research. Also, the lab contains an equipment allowing investigating blood hemostasis with biochemical analyzer.

At the opening of the clinic, the OSTCHEM General Director Alexander Khalin said that all STIROL staff and their families would be treated in the new medical facility.

Concern STIROL is the largest chemical enterprise in Ukraine. The company is a part of the OSTCHEM holding. The concern specializes in production of ammonia, nitrogen fertilizers, plastics. STIROL products are exported to Europe, North and South America, Africa and Asia.