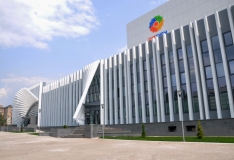 Residents and guests of Gorlovka who came to the opening ceremony were the first to see the new Culture Palace.

Approximately 8,000 square meters of facilities were renovated: the new concert hall that can seat up to 1,100 viewers now boasts new comfy seats and a brand new stage with all its engineering communication lines replaced. The building façade and the adjacent territory are beautifully illuminated, while stairs at the main entrance are equipped with a heating system. The 4,500 m² square in front of the Cultural Centre has been revamped as well.

Its reconstruction is part of the ‘Preserve Your City’ program initiated by Dmitry Firtash, Chairman of the Group Supervisory Council of Group DF. The major reconstruction of this facility and adjacent square worth UAH 50 mln.

The Stirol Culture and Sports Commercial Centre was founded in 1991. It houses 7 art groups, 5 sports groups, and a circus troupe attended by 1,500 people in total. Serhiy Pavlyuchuk, Chairman of the Board of Concern Stirol JSC, stressed that the reconstructed facility would become one of the best concert venues in Donetsk oblast.

“Preserve Your City” is a national initiative of Dmitry Firtash, the Chairman of the Group DF Supervisory Council and President of the Federation of Employers of Ukraine. Dmitry Firtash urges municipalities’ principal employers and large businesses to help communities they are based in. Almost all the companies Mr. Firtash invests in are cities’ principal employers or generate lion’s shares of municipal budgets in cities and towns they are based in. Such municipalities include Cherkassy and Rivne, Gorlovka (Donetsk region), Severodonetsk (Lugansk region), Irshansk (Zhytomir region), Vilnohirsk (Dnipropetrovsk region), Armiansk and Krasnoperekopslk (both in Crimea).