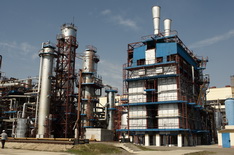 By the end of 2013, Rivneazot intends to repair 13 thousand square meters of roads - both those that are on the territory of the enterprise and public roads.

1.5 km of road has already been renovated for funds of Rivneazot, one of the largest companies in Rivne region. Reconstructed road connects the plant with the nearest towns and is main route to the enterprise for surrounding area residents.

The plant has spent UAH 3 million for repairing of the road from villages Metkiv and Rubche. Reconstruction works consisted of old flooring removal, asphalt laying, installation of curbs and sidewalks improvement. In addition, the enterprise took care of the area around the road and arranged an effective drainage system, fully restored lighting, and planted young lindens and maples instead of old poplars.

“The enterprise cares about the community. In 2013, we paid special attention to roads repairing: 1.5 km of the core road has already been repaired, and we will spend more than UAH 2.5 million for other roads reconstruction by the end of the year”, - said the Chairman of the Board of Rivneazot Myhaylo Zabluda.

Reconstruction of public roads around the Rivneazot enterprise is part of the Preserve Your City program initiated by the Chairman of the Group DF Supervisory Council, President of the Federation of Employers of Ukraine Mr. Dmitry Firtash. He urges municipalities’ principal employers and large businesses to help communities they are based in.

Almost all the companies Mr. Firtash invests in are cities’ principal employers or generate lion’s shares of municipal budgets in cities and towns they are based in. Such municipalities include Cherkassy and Rivne, Gorlovka (Donetsk region), Severodonetsk (Lugansk region), Irshansk (Zhytomir region), Vilnohirsk (Dnipropetrovsk region), Armiansk and Krasnoperekopslk (both in Crimea). Upon the investor’s initiative, companies in these cities are active in social projects run by municipalities or move forward their own initiatives of support to citizens. 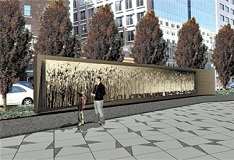 Holodomor Memorial To Be Erected In Washington D.C