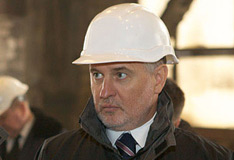 Modernization of Zaporizhya Titanium and Magnesium Combine capacity will strengthen Ukraine’s positions on the global titanium markets. The news was announced by Chairman of the Group Supervisory Council of Group DF Dmitry Firtash during his visit to combine.

“Titanium is the future of the global industry. Ukraine has a huge potential and can become a top-three global player on the titanium market”, – said Dmitry Firtash.

“This program also includes significant investments into titanium mining, titanium sponge and titanium slag production, and titanium dioxide production. We’ve developed investment programs for other producers, and investments will be implemented on all titanium assets. We have ambitions, strategy, resources, people and expertise to build a globally competitive holding. Only through these efforts Ukraine’s titanium industry can compete on the global markets”, – said Dmitry Firtash.

Dmitry Firtash emphasized that Ukraine could become a leader in the international titanium market if the industry grew at a rapid pace.

“For example, China started developing its titanium program only 10 years ago, but now it controls about one third of the global titanium sponge market. Had a private investor come to ZTMC earlier, today Ukraine could have also been a major global player”, – added The Chairman of the Group DF Supervisory Council.