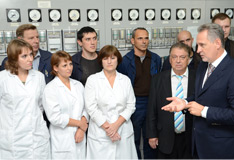 According to Dmitry Zinkov, Chairman of Nadra Bank, residential project will be financed from the funds of enterprises.

"The enterprise places a deposit in the bank, and the bank issues a loan by means of these funds. So funding for these loans is specially allocated by enterprises ata corresponding price", – Dmitry Zinkov described the developed lending project in the interview for Business magazine. He said that the implementation of the preferential housing loans program wouldbe a result of synergy between Group DF’s industrial enterprises and Nadra Bank. The bank is ready to implement such project to any other company. "If any corporate client comes to us and says, that he would like to implementa similar program for his employees, we will answer - allocate funds in our bank, and the bank will give loans”, – said Dmitry Zinkov. The bank earns certain marginon such transactions.

A decision to this end was made by Mr. Dmitry Firtash, Head of the Board of Directors of Group DF during the meeting with employees of STIROL and Severodonetsk Azot in October 2012. According to the businessman, loans against 6 percent per annum interest rate will be issuedby Nadra Bankwith five to seven years repayment period.

“By this token, we will be able to help our employees address their housing problems. Employees will greatly benefit from this proposition as these days Ukrainian banks offer loans against 25-30 percent per annum”, – said Dmitry Firtash during the meetings with employees.