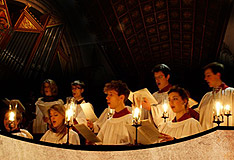 The British choir touring in Ukraine with their Music of Advent and Christmas Program conquered the hearts of the Ukrainians.

Long before the concert start, the spirit in the National House of Organ and Chamber Music was very special. The performance was attended by a very diverse audience – from conservatoire students to acclaimed celebrities including a TV host Anna Bezulkyk, film producer Oleg Kohan, writer Oksana Zabuzhko, as well as an impressive number of diplomats and entrepreneurs. This cultural event was initiated and sponsored by Mr. Dmitry Firtash.

The tour consisted of only two concerts: in Lviv and in Kiev. Mark Williams, the choir conductor and artistic director, has been touring with his ensemble for three years – when the Cambridge chanters are on vacations. According to the conductor, at all other times, the students have a very hectic schedule – both studywise and rehersalwise.

During their three-day stay in Kiev, the chanters visited the St. Sophia and St. Michael Cathedrals, went sightseeing in the historical part of the capital and enjoyed the Ukrainian cuisine – borsch and Ukrainian varenyky (dumplings) at one of the finest ethnic restaurants.

Finally, the talented guests visited the Borys Hrinchenko University to talk with the musical department students. According to Mark Williams, the young people had an interesting conversation and exchange, and even sang several compositions together.

“The choir is not something one talks about, it is something you listen to,” commented Mr. Firtash. “I was really bewildered with their singing. In England, this is one of the most famous choirs and we had been looking for their tour for three years. The concerts in Kiev and Lviv are just a start and in about 12-18 months the choir’s tour of other cities may well be put together. You know, the cultural exchange is so important in the modern world! Through implementing the Cambridge program we are exposing Ukraine to the world. And through the choir of Cambridge, Ukrainians can learn quite a bit about British culture and traditions. This performance has become a genuine gift for Kiev and Lviv residents on the eve of Christmas.”

The choir’s repertoire consists of a variety of classical and modern works. The chanters perform a capella and to the organ accompaniment. Several compositions were sung encore while the Carol of the Bells arranged by Mykola Leontovich and S. Rakhmaninov’s Deiparous Virgin sung in Russian triggered an outburst of standing ovations.

The Kiev concert was preceded by a performance in Lviv, at the Municipal House of Organ and Chamber Music. “Everyone in Lviv was happy with the performance. I am very much fond of this band while in England they are very widely known. They feature an excellent school, they tour across the world,” said Dmitry Firtash.

As is known, the Cambridge Ukrainian Studies program launched in 2008 and made permanent in 2010 was initiated and sponsored by Mr. Firtash. The choir’s tour of Ukraine was part of this cultural exchange program. Dmitry Firtash announced that international students participating in the program will be arriving for a two-month placement in Ukraine each summer.

“The Lviv-based Ukrainian Catholic University is supposed to offer premises for these students’ placement as it was chosen by Cambridge. The Cambridge Ukrainian Studentships program has started for our students earlier this year,” said Mr. Firtash.

The Jesus College Choir is an ensemble with a worldwide repute. Its history goes back to the late 15th century. The choir performs at church services, regularly participates in festivals, special events and concerts across the United Kingdom. The choir does quite a lot of touring both within Great Britain and abroad including Belgium, the US, Estonia. The next tours are scheduled to take place in India, Germany and some African countries.