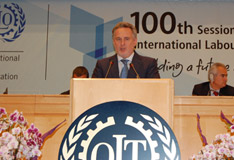 Evolution of the Joint Employers Movement of Ukraine

In 2010, Mr. Dmitry Firtash came out with an initiative to create a united movement of employers of Ukraine in pursuit of a goal of activating the employers’ role in social and economic processes in the country. Mr. Firtash believes that employers, being an effective reformation driver, must be key players not only in business but also in the public life of the country since transformations are imperative not only in the economy but also in a broader context. By uniting, Ukrainian employers will pursue a constructive and sustainable dialog with the government and trade unions becoming a genuine pillar of support for the state, as it is the case in many developed countries.

The world experience vividly shows that the strong state and strong business are inextricably intertwined. No wonder that the world’s top-ten of countries with the highest GDP (the US, China, Japan, Germany, France, the UK, Italy, Brazil, Spain, Canada) concentrates 80 percent of companies listed in Fortune-500. Furthermore, these countries are also leaders in the level of small and medium business development.

Mr. Firtash’s first step towards implementing the task of Ukraine’s employers consolidation was his decision in December 2010 to head the Joint Representative Body of the Employers Party at the National Level (JRB). This body’s primary objective is promoting the social dialog between employers, trade unions and the government in Ukraine.

International activities of the united employers movement is another priority for Mr. Firtash. Being deeply integrated in the global community, Ukraine cannot be isolated from international efforts towards addressing global challenges. In June of 2011, Mr. Firtash headed the Ukrainian employers’ delegation participating in the 100th Conference of the International Labor Organization (ILO). Speaking at the Conference, Mr. Firtash also remarked that Ukrainian employers support the promotion of research and help improve the quality of studying sciences. “By fostering the new specialists generation formation we are laying a foundation for innovative development of our economy,” emphasized Mr. Firtash.

In September of 2011, speaking at the European Conference of Employers in Tel-Aviv, Dmitry Firtash noted that Ukraine may become a new center of Europe’s economic growth. “The current situation vividly demonstrates that acting on their own, Germany, France, the UK and other European countries cannot curb the crisis which is why Europe needs new centers of economic growth. Ukraine is capable of becoming such a center,” said Mr. Firtash.

In order to realize Ukraine’s economic potential, Dmitry Firtash is promoting cooperation between Ukrainian and international corporate representatives with an eye on furthering domestic exports to foreign markets and attracting investments into the Ukrainian economy, and the joint employers movement serves as a perfect platform for this endeavor. In the course of the ILO conference, Dmitry Firtash entered into agreements on organizing business forums bringing together entrepreneurs from Ukraine and from the most vibrantly growing economies: China and India. A series of talks focused on prospects of bilateral cooperation with representatives of Russian and European business communities. The international cooperation effort was enhanced due to the conclusion of the General Cooperation Agreement signed between Mr. Firtash and Ukraine’s Foreign Minister Kostyantyn Gryshchenko in June of 2011. In pursuit of this Agreement and seeking to promote Ukraine’s business interests internationally, the parties have committed themselves to consolidating efforts of diplomats and employers.

In parallel with intensifying the international dimension, Mr. Firtash pays a good deal of attention to building up an effective model of employers’ interaction with the Cabinet of Ministers of Ukraine. In September of 2011, Mr. Firtash had a meeting with the Prime Minister of Ukraine Mykola Azarov where the parties discussed timeliness of and approaches to revision of conditions of Ukraine’s WTO accession. Three years after its accession, Ukraine is now perfectly in a position to demand that the original conditions on which it had joined the Organization be revisited. Commenting on the imperativeness of this move, Mr. Firtash stated that three years ago, the government failed to duly take into account its domestic corporate interests as a result of which business people do not feel protected. He also urged the government to work with employers in one team. The Prime Minister, in his turn, endorsed the idea of activating the government-to-business cooperation. “It would be extremely important if we act as one team as we are protecting our country,” said Mr. Azarov.

The Unification Congress of the Federation of Employers of Ukraine on 29 November 2011 which essentially completed the process of accession of 21 regional and sectoral organizations to the Federation became an important benchmark in the employers’ movement.

Mr. Firtash’s election to the post of the FEU Chairman was another key event of the Congress.

Speaking to the Congress delegates and guests, the newly elected FEU Chairman laid emphasis on imperativeness of protecting the Ukrainian business. “Our companies must be successful operating for their benefit and for the benefit of Ukraine. We will take pride in our accomplishments and in our homeland. Employers unification is really a historical event for Ukraine. This is the path that France, Belgium, the UK, Germany and many other countries passed successfully. The single body representing employers’ interests also exists at the EU level. This is a good sign of our being on the right track. Today, Europe has been struggling with the crisis relying on a strong corporate community. It is only the strong business that can help Ukraine get out of the challenging economic situation,” stressed Mr. Firtash.

He further added that Ukrainian employers’ voice must and will be heard both in Ukraine and globally. Alongside this, he said that the Federation will be strong and influential inasmuch as it can set clear goals for itself and then work towards achieving them. “We have gathered here with serious intentions and for long. Therefore, we must clearly realize what we are after and what we expect from this organization.”

Besides leadership in the FEU, Dmitry Firtash takes an active part in other NGOs on whose platform interaction with major stakeholders in social, economic and political dialogue is being built. In December of 2010 Mr. Firtash was appointed Co-Chairman of the National Tripartite Social and Economic Council (NTSEC), while on the 17th of February 2012, the President of Ukraine V. Yanukovych signed a Decree appointing Mr. Firtash Chairman of this body.

On February 20, the NTSEC meeting took place at which Dmitry Firtash pointed out that in 2012, in the list of the Council’s priorities (including among other things employment accessibility improvement, staffing policy reformation, health care system improvement, tax burden reduction, support to domestic producers, labor remuneration system review) a special focus will be placed on Ukrainian small and medium business promotion. According to Mr. Firtash, large business is interested in the development of small and medium enterprise which in advanced economies generate up to 50 % of their national GDP.

In addition to that, on 13 April 2012, Dmitry Firtash joined the Committee for Economic Reforms under the President of Ukraine bringing together the country’s senior governmental officials, MPs, key corporate executives and leaders of most authoritative non-governmental organizations.