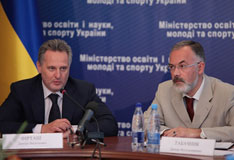 Council of Domestic and Foreign Investors at the Ministry of Education, Science, Youth and Sports of Ukraine

The Council of Domestic And Foreign Investors Under The Ministry Of Education And Science, Youth And Sports of Ukraine (the Council) was set up as per the Decree of the Ministry (MESYS) of 1 March 2011.

The Council is an advisory body under the auspices of MESYS established with an eye on attraction investments, making joint decisions fostering positive changes in the domains of science and research, education, youth affairs and sports in Ukraine.

Mr. Firtash, Head of the Group of Directors of Group DF made a decision to become a co-Chairman of the Council sharing this post with the Minister of Education and Science, Mr. Dmitry Tabachnik.

Dmitry Firtash is one of Ukraine’s largest employers: there are about 25 employees working at companies under his control and personnel training, new technologies incorporation, production modernization, social infrastructure improvement are top priorities for Mr. Firtash which he also pursues in the capacity of the Head of the Joint Employers Movement of Ukraine.

Mr. Firtash is confident that it is only through uniting efforts of the state power, corporate world and research community that Ukraine is capable of achieving a breakthrough in its development. Science and business must cooperate and work out shared goals of innovative advancement while state power authorities must be there to create adequate conditions for attaining those goals. In this connection, the Council offers an excellent discussion ground for investors, researchers and government officials. In addition to Dmitry Firtash, the Council membership also includes Mr. Anatoliy Girshfeld, President Industrial Group UPEK; Mr. Paolo Belli, coordinator of Human Development Sector of the World Bank representative office in Ukraine; Ms Anna Derevianko, Executive Director European Business Association and others. The academic community is represented in the Council by Mr. Mikhail Zgurovsky, Chairman, Association of Rectors of Technical Universities of Ukraine, among other imminent authorities in science and education. Mr. Yevgeniy Sulima, First Deputy Minister of Education, Science, Youth and Sport and Mr. Mikhail Goncharenko, Chairman of the State Inspectorate for Educational Institutions sit on the Council as the government representatives.

After the USSR disintegration, Ukraine has so far failed to put in place an effective market-based model of industry-to-science interaction, as well as a professional training system consistent with modern specifics of the labor market demand. Statistics suggests that the share of Ukrainian industrial enterprises incorporating innovations in their operation barely exceeds 10-15 percent whereas same index in Germany is over 70 percent. As result, unlike developed countries where 85 to 90 percent of growth is secured by research-intensive products manufacturing and export, Ukraine’s performance in this context is way inferior. Ukraine’s share in the international hi-tech products market (aggregately estimated to equal US$2.5 – 3 trillion) is as low as just 0.05 – 0.1 percent. An imbalance of the labor market is yet another problem. Young people aged between 15 to 24 years old represent the highest proportion of the unemployed – about 20 percent, against the backdrop of Ukraine’s average unemployment rate of 9 percent. The situation is obviously aggravated by an evident shortage of skilled technically-trained specialists. The “brains leak” problem is yet another immediate priority. Some estimates suggest that, on the average, the government spends about US$50 thousand in the training of each University graduate. This being said, Ukraine invests enormous amounts into the preparation of cadre to work elsewhere.

The Council’s first meeting took place on the 30th of May, 2011. In addition to the Council members, the meeting was also attended by representatives of the Joint Employers Movement of Ukraine. In particular, Mr. Dmitry Tabachnik stressed upon the importance of business people’s involvement in funding education and research.

“At present, public funding is not sufficient so it is important to develop ways of attracting extra-budgetary funds. In order to capitalize results rather than the process per se, goal-specific private investments made directly into education and science are crucial,” said Dmitry Tabachnik. Mr. Dmitry Firtash added that investments in education are a strategic imperative. “When a business wants to expand, the first thing it thinks about is qualified personnel and new technologies. This is what creates the basis for competitiveness. The interaction of business and science, and business and education is a foundation of a strong economy. We cannot exist without one another,” said Dmitry Firtash.

The Council’s first meeting resolved to, by the next meeting, draft proposals of concrete investment projects involving universities, R&D institutions and other stakeholders active in the fields of science and education. Furthermore, MESYS and Joint Employers Movement have agreed to jointly participate in forming the governmental procurement order for professional training in order to minimize an imbalance on the labor market and promote technical vocations across Ukraine.