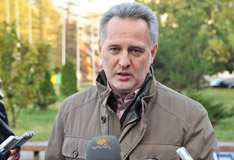 I Don’t Want to Go In For Politics, Says Dmitry Firtash

Talking to journalists in Simferopol, Mr. Dmitry Firtash, Head of the Board of Directors of Group DF stated that he was not going to run for an MP post, nor will he get engaged in any other political project.

“I can perfectly explicitly tell you that I am not involved in politics. This is not even worth talking about. I am not going to run for an MP post, this is something I don’t belong to,” said the entrepreneur. “My belief is that business and politics are two different things,” stressed Mr. Firtash.

He also added that for the very same reason, he has no intention whatsoever to join any political party. “It’s not because I like or dislike this or that party, I just don’t want to be involved in politics,” he said.