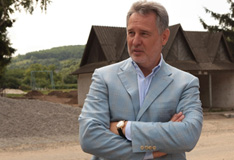 In the past decade, Dmitry Firtash has been actively contributing into the development of his native village of Synkiv in Zaleshchiki district, Ternopil region, where he was born and went to school. The entrepreneur makes frequent visits to Synkiv where his mother still resides. He meets with his fellow-villagers and always sees to it that they have access to comfortable life and modern amenities.

Mr. Firtash has been pursuing a systemic approach to the construction and reconstruction of numerous rural facilities and infrastructure elements. Mr. Firtash’s financial assistance helped build and maintain roads in an ideal state, get each household connected to gas supply, remodel the village school and equip it with several computer classes while broadband Internet lines were laid in all houses. A new stadium is being built next to the school. In addition to that, the construction projects funded by Mr. Firtash include a new village council office, a modern hotel, restaurant and a family practitioner’s clinic.

The massive restoration effort at the Church of Translation of Relics of St. Nicholas is nearing completion. This temple was founded in the 1630th and is now a government-protected architectural monument. Major restoration works have been carried out, the mural decorations are renovated, the church plate has been acquired, the dome is set and the belfry erected. This Greek Catholic Church is a home of worship for up to 1300 parishioners.

Opening Western Ukraine’s largest greenhouse facility DF Agro in the Synkiv initiated and financed by Mr. Dmitry Firtash, a Synkiv’s native became a new milestone in the village’s development. The enterprise is estimated to annually 4 thousand tons of tomatoes and 1.55 thousand tons of peppers.

Dmitry Firtash projects that the greenhouse facility will trigger the village’s rebirth. “I was not pursuing the goal of capitalizing on agricultural business. For me, this greenhouse complex is a tool for helping my native village. New jobs will emerge, new receipts to the local budget will be generated, the funding for maintaining the infrastructure will become available,” explained the businessman. “This is my homeland where I was born and raised which is why I was committed to help it. I started to build a school, a kindergarten there until we bumped into a problem: the village has no cash to pay utility bills and wages to employees. That caused us to look for a business endeavor that would help the village rise. We chose greenhouses because growing cucumbers and tomatoes has been a traditional enterprise for Synkiv. I myself used to sell tomatoes at the market along with my mother,” recalls Mr. Firtash.

He further told that the past two decades saw the disappearance of 360 villages. “It is business that is capable of reviving the village by setting up new enterprises, by creating new jobs. For the Federation of Employers of Ukraine, this is a core issue. I hope we will manage to make it happen,” he said.

In the district administrative center of Zaleshchiki, Mr. Firtash provides funding for the remodeling of the district hospital servicing up to 50 patients. Quite a few buildings date back to the early last century and badly require capital overhaul. The hospital modernization program envisages the erection of new pediatric and emergency care wards. Further, new medical equipment and nine ambulance cars will be purchased for the hospital.