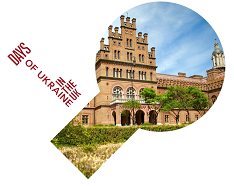 On 17-19 October, 2013, London will host an unprecedented event – The Days of Ukraine in the United Kingdom. This project is aimed to showcase European Ukraine to British residents.

Initiated and organised by FIRTASH Foundation, this project runs with financial support from Group DF, an international group of companies. The Days of Ukraine in the UK received support at the highest level, including the patronage of the President of Ukraine, Viktor Yanukovych.

Lada Firtash, the Founder and Chairperson of FIRTASH Foundation, chairs the Organizing committee. According to the chair of the Firtash Foundation over the three days, Londoners and visitors to the British capital will be treated to the best of Ukraine’s rich and diverse cultural heritage and contemporary arts. The initiative is aimed at promoting the positive image of Ukraine in Europe.


This event is intended to bring Ukraine, with its rich history and culture, closer to the UK. “Our main objective is to let Europeans discover Ukraine as a European country that is developing rapidly and shares European values,” says Lada Firtash, Chairperson of FIRTASH Foundation and The Days of Ukraine in the UK. “We will introduce the rich historical and cultural heritage of Ukraine and its people to the European public, as well as showcasing Ukraine’s contemporary arts. Our logo is the key, which symbolizes all this. The aim of this initiative is to open Ukraine for the British public,” added Ms Firtash.

A fascinating, multi-faceted and talented country, Ukraine will be represented by outstanding artists. Not only will visitors of the fair taste delicious Ukrainian cuisine, but also see various artisans at work, and experience the colourful spirit that is Ukraine.

“The cultural development of the nation is the main task facing every country, because building the spirit is a key to building the nation,” says Dmitry Firtash, the Founder and Chairman of the Group DF Supervisory Council. “Culture also plays a major role in the dialog between countries, offering new opportunities to grow and work together. The Days of Ukraine in the UK is the first large-scale international event that will show Ukraine in a new light, broadening what Britons know about our country, and giving new impulse to Ukrainian-British relations,” added Mr Firtash.

By bringing together members of the Ukrainian and British establishments, The Days of Ukraine in the UK should strengthen both cultural and commercial ties between the two countries. The festival’s partners include such experts as Iryna Danylevska, Oleg Skrypka, and Igor Abramovich. Iryna Danylevska curates a fashion show at the festival, Oleg Skrypka is the mastermind behind an authentic Ukrainian country fair, and Igor Abramovich will curate an exhibition of contemporary Ukrainian artists.

FIRTASH Foundation is a private charity founded by Dmitry and Lada Firtash.

The Foundation’s primary objective is long-term and systematic support of education and culture in Ukraine, as well as development of creative and intellectual capacity of the Ukrainian youth.

Full programme of the festival is available on the web-site of the Project.