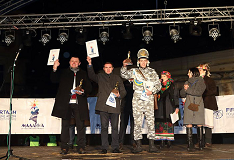 FIRTASH Foundation supported the Chernivtsi traditional folklore festival Malanka Fest 2016. This year, as well in previous years, the Foundation of Dmitry and Lada Firtash allocated substantial prize money for the festival participants – 100.000 UAH. At the same time all the Malanka groups received compensation of transport costs.

This year the festival was attended by 38 Malanka teams from the Western regions of Ukraine, but the geography of the event was much wider – annual folk festival attracted tourists from neighboring cities and regions as well as from abroad. This year Malanka was visited by tens of thousands of spectators.

“We believe that the support of this remarkable folklore-ethnographic festival is an important contribution to the preservation of the spiritual heritage and traditions of the unique and distinctive Ukrainian culture”, said Lada Firtash, the founder of the Foundation.

Here are the winners of Malanka Fest 2016:

- Malanka team from Sukhoverkhov village took the first place and received an award of 50.000 UAH;

- Chagorsky Spartans from Chagor village took the second place and won the prize of 30.000 UAH;

- Malanka from Gorbovo village took the third place and received the prize of 20.000 UAH.

Malanka Fest is a folklore-ethnographic festival, distinctive, bright and unusual holiday traditional for the Western Ukraine. On January 15, Malanka teams from all over Bukovyna gather in Chernivtsi in order to compete for the title of best Malanka during the annual festival of Malanka Fest.