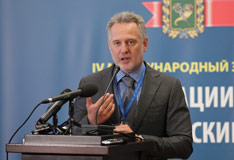 Speaking at the 4th International Economic Forum “Innovations. Investments. Kharkiv Initiatives” in Kharkiv today, Dmitry Firtash, President of the Federation of Employers of Ukraine proposed the establishment in Kharkiv region of a private investment fund supporting small and medium enterprises.

“In Chernivtsi region, the Federation of Employers of Ukraine set up – as a matter of experiment – an investment fund Bukovyna. In three months of its operation, the fund has received 70 projects for review. Isn’t it a testimony of people’s commitment to being involved in business? If we help them rise up on their feet today, tomorrow they’ll make up a support pillar for the nation,” stressed Mr. Firtash.

He further explained that an investment fund of this kind may well be set up in Kharkiv. “We have discussed the idea with the leader of Kharkiv employers Anatoliy Ghirshfeld and I think he may well make this project a reality,” assured Dmitry Firtash.

The FEU President told that the Fund is formed from local entrepreneurs’ contributions. “We are talking about some 3 to 5 million hryvnias. This is not the public money. These are private contributions from regional business people. We had a discussion of this idea and those who chose to participate contributed as much as they could,” said Dmitry Firtash.


The Chernivtsi-based Bukovyna fund set up to support SME provides financing to business projects along two lines: financing of business ideas “from scratch” and preferential loans against a 5 to 15 percent interest rate.
The authors of new business ideas can qualify for receiving 50 to 80 thousand worth of a startup capital for launching their business. Notably, ownership in the projects will remain in their authors’ hands which the Fund’s interest in such enterprises will vary within a 10-49 percent range. In case that a project is successfully realized, the Fund’s margin will be earned from selling its share in the enterprise.

The existing companies may qualify to receiving loans in the amount from 150 thousand to 320 thousand UAH to finance production modernization, debt restructuring and operational capital replenishment.

As planned, the Chernivtsi Regional Enterprise and Investment Promotion Council led by the Governor Mykhailo Papiev and Bukovyna Fund’s Supervisory Board will have a joint meeting on September 18 to select the projects qualifying for financing. An essential condition applying to winning bids is that the proposed projects must be implemented in Chernivtsi region while preference will given to the ones that may prove reaching a break-even performance during the first year of operation.

Bukovyna Fund establishment was initiated by Mr. Dmitry Firtash, President of the Federation of Employers of Ukraine and Head of the Board of Directors of Group DF when he was meeting with Chernivtsi business community in February 2012. The Fund’s structure and operational mode essentially replicates the experience of Cambridge University where three funds have been supporting students’ promising ideas for over 40 years now. Presently, Bukovyna is the only fund in Ukraine offering financing to projects with a good commercialization potential and providing preferential lending to businesses irrespective of their sectoral orientation. The capital managed by the Fund equals 3 million UAH. All the receipts from successfully implemented projects will be channeled to the financing of new business proposals.