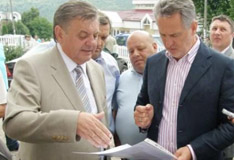 Mr. Dmitry Firtash, Chairman of the Board of Directors of Group DF has met with Mr. Valentin Khoptyan, Governor of Ternopil Region in the village of Zaleschiki, Ternopil Region.

As part of this meeting program, Mr. Firtash and Mr. Khoptyan visited Zaleshchiki District Hospital and discussed approaches to its reconstruction and extension. Special focus was attached to pediatric, surgery and intensive care wards.

Mr. Vasyliy Romaniuk, the Hospital Director, explained: “One of the Hospital’s buildings is located in a park 700 meters away from the central building. It would have been great if all wards could be integrated under one roof which is only possible if the hospital is either reconstructed or extended to include new buildings. In addition, renovation and remodeling in existing wards is a priority, as well as acquisition of new equipment and ambulances.”

Construction contractors have been instructed by Mr. Firtash and immediately started developing their proposals addressing the Hospital’s reconstruction and expansion needs.

Mr. Khoptyan announced: “Today, owing to the support and assistance of our townsman Dmitry Firtash, we are launching the remodeling and reconstruction of Zalishchiki Central Hospital. The contractors will prepare their proposals and the actual works will commence right after. This effort will include remodeling of the existing hospital wards and attaching a newly built surgery and intensive care wards to the central building.”


During the Hospital restoration and remodeling conference and while visiting patient rooms, Mr. Firtash pledged that 9 ambulances will be acquired, and invited proposals listing the most essential pieces of medical equipment.