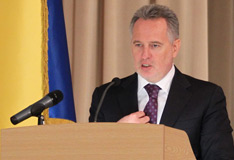 Promotion of Enterprise in Ukraine

Back in December 2010 when Dmitry Firtash initiated the joint employers’ movement strategy, he highlighted the elevation of business’ role in the nation’s socio-economic development and improvement of business environment among the key priorities of his activity in this capacity. “Doing business in Ukraine is tough and not always fair. Business is often times used just to fill the budget gaps instead of caring about preconditions for its development. No wonder that 40 % of the economy operates in the shadow”, noted Mr. Firtash speaking at the unification congress of the Federation of Employers of Ukraine.

Unfortunately, over the 20 years of Ukraine’s independence history, the government has failed to put in place a clear, consistent and effective enterprise support program which would take a proper and balanced account for interests of all parties to the tripartite socio-economic dialog. Alongside that, it is an undisputed fact that business serves as a foundation for any economy, and the more sustainable is its operation and evolution, the more powerful the national economy grows. Mr. Firtash has repeatedly quoted compelling statistical data proving that successful performance of most advanced economies stems from the efficiency of operation of business – whether large-scale, or medium, or small. “On the average, the developed small and medium business in European countries generates 50 percent of the GDP. Take a look at our statistics – we only have 10 to 15 percent. This is ridiculous, an economy may not rely on large business alone”, commented Mr. Firtash.

Stating that a systemic solution of this problem will be for the benefit of both the government and business, Dmitry Firtash has launched an extensive effort with an eye on strengthening the entrepreneurs’ position and improving the legal and regulatory framework governing their operation. The first challenge to be addressed in this direction was identified as formation of a single platform which would allow employers to unite and have a consolidated voice in advocating their interests. This platform became perfectly available on the premises of the Federation of Employers of Ukraine after its November 2011 unification congress. It was from this convention’s podium that Mr. Firtash identified his priorities in protecting business people’s legitimate rights, and voiced initiatives targeted at improving the country’s business climate.

The next step, in Mr. Firtash’s opinion, must materialize in the involvement in this systemic effort of the maximum possible number of companies irrespective of their size and geographical location. To this effect, the employers’ leader has announced his firm intention to visit all regions of Ukraine to get the first-hand status brief locally, to discuss business development and protection opportunities with representatives of local corporate communities, and to launch the process of putting together a register of companies operating in the country. This register will then be used as a foundation for drafting a 5-year program of economic development. “Our objective is to outreach each and every enterprise in your region and across the country, and to draw up a register to have an understanding of who we talk to, what we talk about, and for them to know where to refer to. Our Federation encompasses virtually all sectors: engineering, agriculture, heath care, chemistry, mining, etc. Compiling this statistics on our premises makes a perfect sense. Knowing what we have we want to suggest to the government that a 5-year industrial development program be developed with account for resources and needs we have”, said Mr. Firtash. Special attention will be devoted to creating a register of mono-cities and principal employers operating in specific economic circumstances and in a special social responsibility mode.

Over the first four months of 2012, Mr. Firtash managed to visit five regions: Chernivtsi, Cherkassy, Lviv, Crimea and Nikolaev, and to articulate a series of important initiatives. For instance, speaking in Chernivtsi, he suggested the creation of a small enterprise support fund, in Cherkassy he urged the local business people to focus on maximizing the efficiency of agricultural production. While talking to Crimean entrepreneurs, Dmitry Firtash announced the launch of a commodity exchange on the premises of the Federation of Employers which will most certainly boost economic ties between small and medium enterprises in the region.

In parallel to building up interaction with entrepreneurs in the fields, Mr. Firtash is equally active in the capital enhancing cooperation with decision makers at the political level. In particular, in February 2012, following Mr. Firtash’s initiative the Federation of Employers of Ukraine organized a roundtable involving ambassadors of European countries being Ukraine’s major economic partners, and senior governmental officials of Ukraine. Speaking before this high-profile gathering, the employers’ leader of Ukraine stressed that any business creating jobs in Ukraine is a Ukrainian company irrespective of where its headquarters is registered. Therefore the problem of inadequacy of the economic climate is equally topical for all enterprises and the more active companies for foreign capital participate in advocating the national business’ position, the more receptive the government will be to the entrepreneurs’ voice.

An important part of the overall strategy of strengthening business’ positions is cooperation with foreign and international organizations advocating corporate interests. To this end, Mr. Firtash had a meeting with Mr. John Cridland, President of the Confederation of British Industry in March 2012, and a month later – with Mme. Laurence Parisot, President of the French Employers’ Movement (MEDEF). “Today’s business is not confined to a context of one country, it has become globalized. Therefore, any improvements in the environment in which companies operate, say, in Ukraine, will not be sufficient for the development of Ukrainian global companies. We clearly understand how important it will be for other countries’ businesses. It will become a new era for entrepreneurs,’ stressed Mr. Firtash in the conversation with his British counterpart.